Firth was incorporated on January 20, 1879. There is a great deal of interesting history surrounding the founding of Firth and the development of the community over the years. So sit back and enjoy a journey to old time Firth...a great place to be. 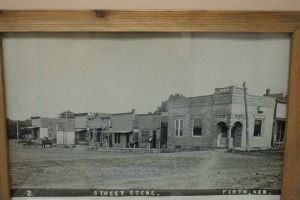 (Much of the following information is taken from A History of Lancaster County, by Elinor Brown, 1971.)

Very early in Nebraska’s history – prior to 1860 – a “courthouse square” was set aside in a town platted at this location.  Evidence of its existence is noted by the location of a park in the center of Firth.  Located near the middle of “old Clay County” on the Nemaha River, this was thought to be “the western-most region for white settlement,” and as such, settlement did not burst forth.  Any residents were obliged to travel to Nebraska City for supplies.

In 1863 politicians in Lancaster and Gage counties, taking advantage of the lack of organization, split Clay County between them – each taking half and doing away with it altogether.  There was still no sign of a town in 1866, only a family named Givens living here.

However, in 1870 when the Atchison & Nebraska Railroad built north out of Kansas “under the dynamic leadership of Frank Firth,” a town was established.  From Rulo, the line went northwest to Humbolt.  From there, the company offered to build the line either to Lincoln (via Beatrice or Tecumseh) or to Plattsmouth (through Nebraska City) depending on which community line subscribed “sufficient aid along the line.”  A delegation from Lincoln came to Tecumseh promising $120,000 in bonds, free land for a depot, and a right-of-way through the city.  The rails were completed to Lincoln by early fall 1872.

A station was needed in South Pass Precinct.  The post office, named “Firth” opened in Section 35 on December 6, 1872, and a plat was filed on July 28, 1873.  The D. E. Champion, who established a “scoop house” near the railroad, was the first to build a house.  The town was incorporated on January 20, 1879.  By 1881 Firth was said to have been one of the largest grain markets on the A&N, shipping out some 700 carloads of grain and livestock.

Firth was known for its fine four mill owned by the Kilbourne Brothers, whose “Golden Crown” flour was a popular brand.  Several other mills also served the vicinity, most of them falling prey to fire or flooding.

A lumberyard was established soon after the railroad arrived.  In 1910 the business was purchased by Eilert Harms.  Surviving a fire in 1916, the company remained in the family, managed by John harms and later by Howard Harms.

A two-story schoolhouse served the town for many years.  In 1916 a brick school was built and the 12th grade added.  Firth consolidated with other schools to form the Norris School District in 1964.  In 1971, after standing empty for a number of years, the Firth school building was torn down.

There are two active churches in Firth.  The Firth Reformed Church, organized in 1890, continues to serve a membership of over 250.  A Presbyterian Church, built in 1881, was destroyed by fire in 1946.  During the rebuilding, the congregation affiliated with the Bible Presbyterian Testimony, and then as the Firth Community Church.  Today it is the Evangelical Free Church of Firth.

Firth has had a water tower for many years.  In the 1950’s a sewage system was installed, and Main Street got a coat of asphalt.  The remaining streets were paved in 1973. Lakeview Rest Home was built in the northeast part of Firth in the 1970’s.  Funds for its construction were raised in the Firth, Pella and Holland communities and the land was donated by Henry and Bertha TeKolste.

Firth’s population is said to have reached 450 in the early 1900’s, but dropped during the 1930’s and again after World War II.  Located in a good agricultural area, the elevator provided a local market for grain.  Today Farmer’s Cooperative serves the area; there are two eateries, a general store, an auto repair shop, a community center and various other businesses.  Today the population of Firth is over 600.

People choosing to move to Firth today do so because of the school district, the easy access to Lincoln or Beatrice and because of the quiet, pleasant, and congenial atmosphere found in this community. 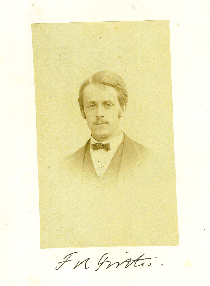 (Article originally printed in The VOICE newspaper on August 9, 1979 in honor of the Firth Centennial. The article is a short summary of the book Frank Russell Firth – A Memoir published in Boston in 1873. A copy of this book is kept at the current Firth Village Office.)

Frank Russell Firth was born in Clappville (now Rochdale), a village in the southern part of the town of Leicester, Massachusetts, on the 26th of May, 1847. His father, Abraham Firth (born in Leicester, England), was then station-agent of the Western Railway at that place. [His mother, Maria Louisa Firth, was from Charlton, an adjoining town, her family name being Russell. – Note: Firth has streets named Abraham and Russell.)

So begins the tale of the life of Frank Firth, the young man from New England who was to move west to Kansas and Nebraska, take over as superintendent of the Atchison and Nebraska Railroad in Firth, and eventually have a town in southern Lancaster County, Nebraska named after him.

Firth, it seems was something of a prodigy. At age eight he created a weekly newspaper, “The Clappville Herald, selling it for 2 cents weekly or $1.00 per anum.

He excelled in the New England schools he attended, attaining grades always between 98 and 100. By the time he finished high school he had succeeded in making a miniature working steam engine.

Always characterized as sensitive and intelligent, Firth was nevertheless drawn to more rugged work, entering the Institute of Technology in Boston in 1865 and later working in an engineer’s office in Boston.

By late 1868 (when he was 21) Firth had earned his diploma in civil engineering. He then journeyed west to Kansas and began working for the Fort Scott Railroad on bridge projects. The pay for his work was $2 per day and board.

His dream in life was to become superintendent of a railroad, and gradually he made his dream real. In short order he became a division engineer in Twin Springs, Kansas, upping his salary to $150 a month.

After returning briefly to New England to help out his father at a railroad office, he returned to Kansas in 1870 to work on the new Leavenworth, Lawrence and Galveston railroad line, but in June of 1870 he contracted typhoid fever.

Firth recovered from his illness only to find that his old job had not been held open for him. He took office work until the Atchison and Nebraska Railroad asked him to sign on. In January, 1871, the track had reached the Nebraska state line. Soon thereafter Firth was sent to Firth (before it knew it was Firth) as acting superintendent.

Always conscientious about his work, Firth wrote to one of his superiors, “I have felt almost sick with anxiety, because I was notified to spend no more money until Mr. Joy [his supervisor] should visit the road, and I knew that without continuing to repair, we should kill some of our passengers and gain a bad reputation. I had decided to have nothing more to do with the road unless I could be free to make it safe and thoroughly good.”

Firth’s hard work and fair-mindedness won him the respect of his coworkers and of the community. Soon he was promoted to Chief Engineer of the Atchison and Nebraska, though he remained in Firth and continued to act as superintendent too.

His life came to an early end – he was only 25 years old – when a locomotive crashed through a bridge which had been judged sound by a crew checking it out. Firth happened to be near the bridge when the locomotive plunged through the track and down into the ravine.

The locomotive rolled over onto him, his arm pinned and the boiler scalding his body. Still, he lived on for several days beyond what anyone expected.

In September, 1872, the Western Paper carried this notice in it: “A short distance from Lincoln is the town of Firth, which has been just laid out. It is named in honor of the memory of the late lamented superintendent of the road.” 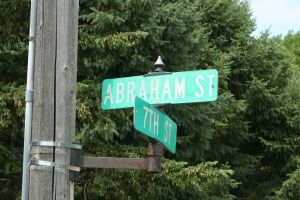 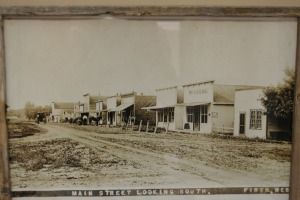 (The following article is taken from the November, 1909 issue of The Firth Echo. It was re-printed in The VOICE newspaper on August 16, 1979 in honor of the Firth centennial.)

A few words about the best little town in Lancaster County.

Firth is a little city of 500 inhabitants. It is located in the southeast corner of Lancaster County, 22 miles from Lincoln, our county seat and the capitol of our great state of Nebraska. We are located in the midst of some beautiful scenery – our shady park to our east, the Nemaha river on our north, west and south with its banks thickly covered with huge trees, furnish the best recreation for the sportsmen who enjoy hunting and fishing. We are also justly proud of our farmlands, our industrious farmers, and their estimable wives and children, who assist them in their daily toil. Lands for many miles around us, if sold at all, are valued at $90 to $150 per acre. Numerous and costly improvements dot the premises of these happy and contented farmers and their stock continues to make hay even if the sun has gone down. We are on the main line of the Burlington railroad from ST. Louis to Billings, Montana, and have no kicks to register for the railroad service that we do not receive.

In our city we have a public school worthy of the admiration of our entire populace. The school supports four able teachers, and our children are obliged to finish ten grades before leaving to take up a course in some business college.

The Firth Bank is located in the heart of the city and its business is looked after by two energetic, hustling young men, who greet you with a smile and look after your interests in a businesslike manner. Their deposits at this time are $170,000.

McElvain & Damrow are proprietors of the new Firth Roller Mills. This business started up about the middle of January,1909, and during eight months shipped out 503 cars. Their daily payroll amounts to $50 per day – Thirteen men being employed steady. They are at present shut down making repairs and when they start up again will have in rels to their already large capacity. This is an enterprise that our people in general should appreciate.

We have four churches, viz: Christian, Presbyterian, Holland, and Christian Scientists. They are all blessed with increasing membership and, able pastors. Their good work the past year has been recognized by our people

We have three general stores, all owned and managed by young, wide-awake hustling business men.

The balance of our enterprises are as follows:

One livery and feed barn

No saloons or gambling houses

Best amateur baseball team in the state – no josh

And last, but not least, some of the best people in the world.

If you are looking for a home, a place to trade or the best markets for your stock and produce, come to Firth where we always have the best.